The first six chapters and prologue have been rewritten! Kim’s editing suggestions required MASSIVE restructuring, but the payoffs are definitely worth it.

For instance, there were previously no explosions or thrill-packed battles in the beginning chapters at ALL. What was I thinking, right? Then Kim suggested that I move up an event from the end of the book all the way to the beginning. I was a risky change, but adding an action-oriented event gave me a chance to remind returning readers who everyone is and what their abilities are. And yes, almost every main character from the first book takes part—even Tome! His non-verbal powers are finally unleashed.

There have also been adjustments to the story structure. In the first book, the protagonists were carried along by smaller events and antagonists until they eventually found out that there was one BIG event/antagonist in the works.

THIS time there will be a clear goal from the start. I recall the words of Javier, the first person to leave a review on Amazon: “In the beginning, I was confused with the plot, but I decided to keep reading to see what was going on. I am glad I did.”

So next time you’ll know what the plot is, Javier. I suppose telling you right now would be spoilers, so let’s just say the goal will be related to the erasure of the planet’s population, and the mystery to find out exactly what happened. Thank you again for your feedback. 😁

I have also been working on adding far more amounts of ‘lore’ about the nations and peoples that existed on Overland before the disaster. The first six chapters of Abandonment Party 2 are just full of juicy details now. And new characters that make good use of this information, I might add. After all, I wouldn’t put in details unless they furthered the story or character development.

I believe that’s enough updating for now. If you want to suggest something for the next book, you know where to comment! Otherwise, I’ll just assume there are no problems or complaints! Farewell! 😉

30 chapters of Abandonment Party 2 have been critiqued by Kim! She has revealed flaws, exposed my laziest plot devices, and DEMANDED that I push this sequel to a level of excellence unheard of in the history of literature! We’ve had many conversations in person, over Zoom, and that antiquated device known as ‘the telephone.’ But now I am ready! Ready to perfect my next novel! Just like it says at the top of this web site. END_OF_DOCUMENT_TOKEN_TO_BE_REPLACED

In case you missed the memo, I made Abandonment Party free to download from July 31st to August 4th. And if you are one of the people that downloaded the book let me start out by saying THANK YOU. I didn’t write this story so that I could keep it to myself. I want to reach out to individuals. I want to give you something fun to read as a temporary escape from society. (I’m a recluse, but I’ve heard society is quite annoying lately.) And yes, more books in the series are coming. Kim is reading over the sequel as I type this.

If you liked the book, don’t forget to leave reviews on Amazon. People can’t make an informed choice with only two reviews! I mean, YOU did, but the book was free, ha,ha.

Or even better, come here and use the comments to tell me what I can do to make the next book EVEN MORE AMAZING. What do you want to see more of? What did I do wrong? I can improve on my own, but if you criticize me, I can improve faster! Or heck, if you spot a typo I can just go and fix the ebook right now! Isn’t technology grand?

But I digress! Let’s get back to how I set up this free promotion. As I said in the previous post, I cranked up the ad money so that more people on Amazon would see the book. And yet I wondered if there was more I could do to spread the word. That’s when I found this blog post:

Turns out this guy had the same idea I did! Zounds, we must be geniuses. I’ll sum up the article: there are places called “Facebook” and “Reddit.” (Yes I’ve heard of them, I’m just saying that for the people coming here 100 years in the future. Gotta think of them.) There are groups on those sites where people go to look for free books. Fascinating, right? I’m normally an internet recluse as well, but I made an account and dropped some posts. And here are the results: END_OF_DOCUMENT_TOKEN_TO_BE_REPLACED

I’ve been messing around with Amazon’s advertising systems this week. It is, indeed, interesting stuff! You can create a ‘campaign’ and then have it target certain keywords that users search for. Such as ‘science fiction,’ ‘cosmic horror,’ or ‘BEST BOOKS EVER.’

Then, when a customer searches using those terms and finds a product, your ad can just plop right onto that page! Provided you can win the bid, of course. Every popular keyword has a bidding range. But you’re not charged unless someone actually clicks on the ad.

So I created a campaign and plugged in 195 keywords and phrases. Every time someone clicked an ad those keywords popped up on a chart along with the COMPLETE phrase that the customer typed in. At the end of the week I had a long list of keywords: 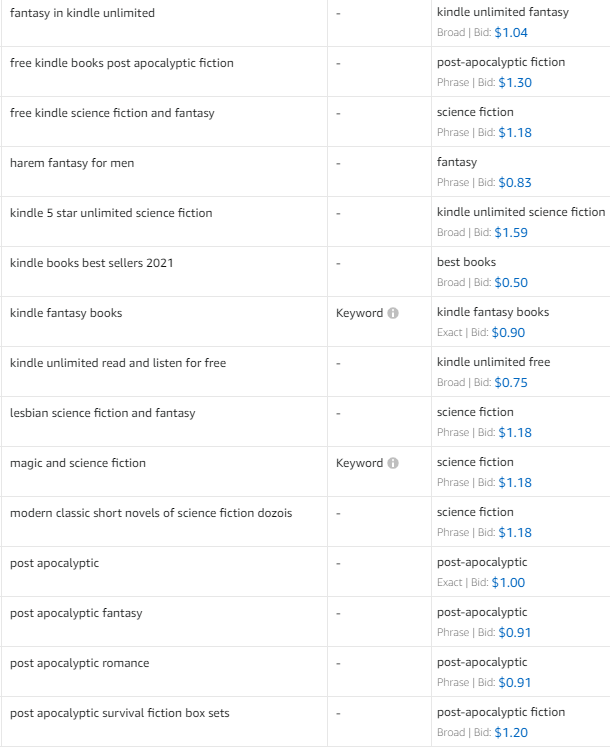 END_OF_DOCUMENT_TOKEN_TO_BE_REPLACED

Abandonment Party 2: I’ve finished revising the first ten chapters; they are all caught up to my current skill level. I have also given a few things proper names so that they stand out more. I’m sending these chapters to Kim as I finish, so she can begin to fill up the document margins with her wonderful notes.

Advertising: I decided to play around with Amazon’s advertising options today. I can pay for ads to pop in under other books that customers are searching for. I’m only charged when people actually click on the ads, though. Interesting stuff. I probably shouldn’t spend too much money on this and just go right for the publishing companies, ha,ha.

Sales: There was a spike in sales on the 16th of July for some reason. I’m not sure why. Maybe it has something to do with that Bookviralreview site?

Remember, leave reviews for me; they really help. I mean, unless they’re bad reviews. 😅

Have a good weekend everyone!

Javier posted his Amazon review on July 4th, 2021. That means he read Abandonment Party before the professional BookViral review! I gotta hand it to you, man, you didn’t wait for society to tell you this novel was good! I respect that! So let’s take a look at what you wrote:

END_OF_DOCUMENT_TOKEN_TO_BE_REPLACED

Well, ‘viral’ in that the book has a virus mentioned in the first chapter. 😅 But enough jests! At long last, my book is reviewed by a critique website! Behold:

END_OF_DOCUMENT_TOKEN_TO_BE_REPLACED

I gave Dad a couple of presents last Sunday: a candle and a plant. He returned the favor by finding an error in my book, Abandonment Party:

‘Laptop’ should be ‘lugtop.’ This book-wide switcheroo is a late change that Kim convinced me to make. She told me that ‘laptop’ wasn’t good enough. These were government-made computing machines, after all! Gifts for the abandoned. Unwieldly and heavy, but with the added benefit of superior battery life and transmission range.

Ah, they also have ANOTHER great feature:

Spyware that records the personal activities of anyone using the device! (As if I had to make this a spoiler. You probably figured it out in the prologue. ‘Oh, the government is giving the settlers free laptops. Nothing strange there.’ 😑

So I named them all ‘lugtop’ to distinguish them from the ONE other different type of laptop computer that appears in the book.

So I fixed the error with the magic of online ebooks. I’m sure no one else noticed. Thank you, Father! Your endless criticism has finally come in handy! 😅

Well, it’s been a few days since the release. Let’s see how the ol’ Abandonment Party ranks on Amazon:

My, my! It ranks near one hundred sixty-eight thousand! I’ve heard that there are MILLIONS of books on Amazon, which means I’ve surpassed millions of other books without even one advertisement! And I’ve got stencils and window markers ready to put ABANDONMENT PARTY all over my truck windshield! Watch out, literary world!

Wait. What’s this? My book is being ranked in the SPACE MARINE category!? There aren’t any space marines in my book! Although Mackaba does mention his marine scooter once.

This can mean only one thing: BRAD VERSUS THE SPACE MARINES! I should have known it would come to this. Looks like I only have about a thousand marines to beat. Will Abandonment Party prevail? Or will Jim Raynor’s love for Kerrigan spur his troops to victory? I’ll do my best to keep you updated. 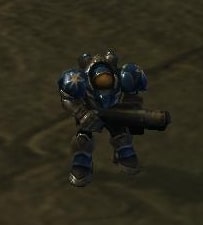 Zounds, Abandonment Party is here! Go get it on Amazon! 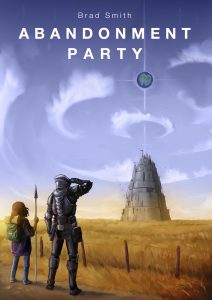 After all these years the book is finally done! Look at what the power of the individual can do! All I needed was the help and support of a few close friends and family! Aaaaaand one of the world’s largest corporations. 😅

Ahem. I assume I can still edit the book if any problems arise. Just come leave a comment here if you find a missing exclamation point. Or if something in the story isn’t explained well enough. I can’t imagine how that would be the case, though. Kim was brutally efficient with her critiques… surely the general public can’t be any pickier than she is?