In these chapters I’m having several stories progress simultaneously. This is challenging for a few reasons: First of all, events that occur in one story effect the others. I will have to make sure these timelines match up.

Second, I want to make each story progress for a satisfying amount of time before I switch over to a different one. I hate it when the point of view keeps changing so fast that it seems as though nothing of importance is conveyed. Anyone keeping up with One Piece may know what I’m talking about; some chapters seem to do nothing but “check in” with the seven groups of people running around.

Fortunately for Oda, AUTHOR OF ONE PIECE!, he didn’t start doing this until his story had been running for fifteen years. I know the characters, I know the score, and I’m willing to wait it out as the master plan comes together.

I’m the same way when I’m writing; I would not want to pull this kind of stuff in book one. I think switching around between characters before you even know who they are is tedious. I’ve seen some authors do this, though! Can you believe that? There was this one time I started to read a book called A Game of Thrones. Every early chapter was about a different guy! I’d start to get invested in dude number one and then–BOOM! Perspective would switch to someone else. It would leave me hanging before I even had a reason to care about the person being left behind! I couldn’t stand being introduced to new characters only to switch just as things were getting good. I put that book down and went to play Baten Kaitos for the third time instead. Now THAT is a masterpiece of storytelling: 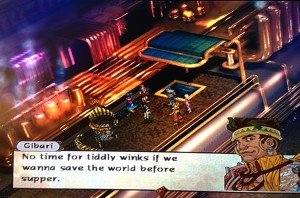 I can only assume that everyone else who read that Thrones book felt the same way. That poor writer, whatever his name was. END_OF_DOCUMENT_TOKEN_TO_BE_REPLACED

Kim, I notice you haven’t sent me any of your sure-fire publishing tips yet. What’s wrong? Is it because I make constant jokes at your expense? No, it can’t be that. Ah! I see. We’re on the internet, right? I keep forgetting how things are done in this age of “tweets” and “likes” and all that crap.

::clears throat:: Kim, please tell me your most worthy secrets! I will gladly check your Twitter at https://twitter.com/byKimAHoward for any advice! Or perhaps you can tell me all about what you’ve learned on your amazing blog over at http://kimberlyahoward.com! I also liked your Facebook page and sent five dollars to your Paypal account.

I’ll shut up now before I lose all hope of receiving a real answer, ha,ha. On to chapter 2!

END_OF_DOCUMENT_TOKEN_TO_BE_REPLACED

Well! It seems my offhand comment about not knowing anything about publishing has drawn some attention. Kim, my silly but dear friend, has offered to teach me what she’s learned!

Of course, I still believe that writing is fun no matter what other people think of it. Even if no one ever buys my work I will still write! I will write until every story I want to tell is completed! As it says in Ecclesiastes 9:5 –

“Whatever your hand finds to do, do it with all your might; for there is no activity or planning or knowledge or wisdom in Sheol where you are going.”

See that, Kim? Some day we’ll be dead! And it doesn’t matter if a publisher has printed our work or not–if we haven’t written our stories by the time we die then they will never be finished! And it’s not like I’ll want to sit down and write in Heaven. Are you kidding me? I’m going to be playing Diablo with Moses. I’ll bet his Witch Doctor is pretty geared up.

So enough delays! Let the crappy first draft of chapter one of Abandonment Party 3 begin! END_OF_DOCUMENT_TOKEN_TO_BE_REPLACED

Might as well get started on the third book! Sure, the second one needs a final revising, but hey–I feel like doing this instead. Actually, I was also thinking about taking a break to look for a publisher or something. But I just remembered that I have no idea how to do that! It probably involves sending emails to people and kissing up to cigar-chomping businessmen. Besides, who needs money!? Not when I have WORDS! BEAUTIFUL WORDS!

So here it is: first draft of Abandonment Party 3. I won’t be going into detail at the bottom like usual; there will be no “choice edits,” just some simple notes. What’s this? You’re crying? Oh, I’m sorry! Let me explain. When I put up the first drafts for ‘AP2’–as it’s known in the ‘hood–those chapters had already been done for while. I needed to examine with great gusto all the garbage I had written in order to make a glimmering second draft that even Pinada could be proud of.

But this here? I just started! I wrote everything yesterday! The goal is to finish–that’s it! I believe a first draft must be completed without looking back! I need to put down any idea I can think of! And then move on. If I stop to scrutinize all the details in my little blog here then I’d never get done. So! Enough pointless words! Let us begin!