He has a thick unibrow, short hair, and almost always wears shirts that have flowers on them. He’s a bit sunburned and pudgy from sitting around outside all day long.

Darrow is forgetful to the point of being inconsistent with his own actions. He will say one thing, then forget that he said it and support a different point of view. He is also lazy, but will follow his group of friends out of loyalty and a desire for his own safety.

He becomes friends with Mean and Trisk at some point between the prologue and the first chapter. He has a bit of a crush on Trisk. When the group meets Tome it is Darrow that wears the crown-shaped communication device that they use to speak with him.

He can be good at math and logical thinking when he remembers that those are skills that he possesses.

He also tries to learn magic from Tome, but whether or not he actually learned anything is unclear.

I suppose Darrow is me as a boy scout. He loves being out in nature, but doesn’t really want to do anything once he gets there. So let me put it this way: He does what I WISH I could have done on all those troop camping trips.

I mean, it would have been so much fun without all that bothersome STRUCTURE and supervision. Here’s all the merit badges you need to earn, Brad. Go take a hike, Brad. Pair up with somebody else and go swimming for exactly thirty minutes, Brad. Such a pain. I got a cool pocket knife, though.

From Final Fantasy IX, “One Danger Put Behind Us.”

This just sounds like some guy chilling in his personal paradise, right? Perfect.

Since I have no artist to portray Darrow, please use your imagination on this photo of Tom Selleck as Magnum P.I. 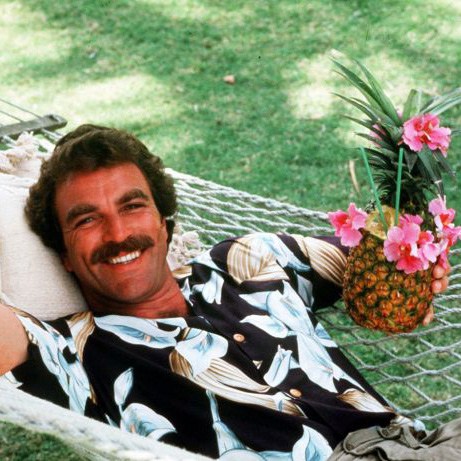 Just remove the mustache and put it over his eyes for the unibrow.