Every protagonist needs an antagonist. That’s the sort of wisdom you’re here for, right? Then let’s move on to Mackaba!

Male. Tall. He has wavy, auburn hair that he tries to keep slicked back.

He wears a tan police officer’s uniform and white gloves. The insignia of the nation of Jesice is on the sleeve: a horizontal, zigzagged line bisected by many vertical straight ones. Half-way through book one he also wears a bright yellow sash across his chest.

The opposite of Mean: he does everything because someone told him to. The government of Jesice stationed him on the alien world to protect the settlers. This didn’t last long, as the viral outbreak sent almost everyone back to the home planet. Now with very few citizens living in the sole city of Hardpan, Lord Ley Tecker requested that Mackaba stay behind to watch over it.

And he is isolated in that city for a month: with no superiors, citizens, or even criminals coming into contact with him. By the time Mean and Dark show up in “his” territory he demonstrates an absurd level of righteous wrath that has been building for the entire time. He may be alone in that city with no reinforcements, but by golly he’s going to do his job!

Firearms training, with both conventional pistols and harpoon guns. For fishing, you see. He loves fishing. He also drives a prototype law enforcement vehicle that’s a modified version of a fruit harvester. Oh, you don’t think that’s scary? Think again: 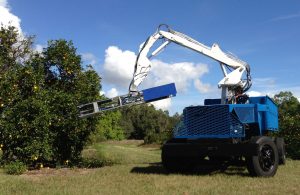 Put a death ray on that orange-picker and you’ll think twice about running that next red light!

Now for the spoilers for later on.

He gains the ability to create “odd water,” a clear liquid that fills a space of his choosing. While it is possible to breathe while submerged in it, the water is as dense as real water. Mackaba can make it even thicker, if need be, to entrap people.

Probably every cop I’ve ever encountered. Or rather, the ones that showed up to tell me I wasn’t supposed to be somewhere. One time I was with my friend Kim in a park at midnight and TWO cops showed up. Then they told us to leave! Can you imagine!? Trust me, nothing inappropriate was going on. This is ME we’re talking about.

Jokes aside, I know the position they’re in. Because you see, there is also a bit of myself in this character. I used to work at a daycare. Usually I’d be cleaning up the place at night. And as I mopped those macaroni-encrusted floors I’d think of myself as the “guardian” of the building. I’d be like Mackaba, right? All alone in this place, just daring some punk to come along and challenge my dominion. And when they did show up—OH IT WAS ON! “Hey! You can’t put your trash in the cardboard recycle bin at two A.M.!” Or “Raccoon party in the dumpster? Not on my watch!”

It’s that misplaced fervor that I use when I’m writing for Mackaba and his ridiculous sense of authority over anyone invading HIS city.

And until I can find someone to illustrate this character, I will use this fake hearthstone card I made to represent him: 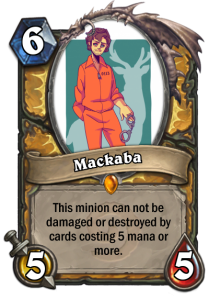 I couldn’t find the original picture when I went looking for it. Apologies to whoever created the art; please contact me so I can give you credit. Also so you can tell me what that deer is doing in the background. (???)