The antagonist of book one!

A man with feathered, blond hair and yellow eyes. He wears black slacks and a white shirt with long, loose sleeves. Several medallions are tucked beneath an outer vest.

Personality: In the past Parlay was kind. He wished to use his healing magic to help people. However, in Parlay’s society, magic that altered the body was taboo. He was rejected by his peers—up until the point where his peers all died from the worldwide calamity.

Now, five years or so later, he meets the settlers from The Eye. Parlay now seeks to prevent another extinction by opposing his will on the populace by force. He is arrogant to others, yet displays a playful side to his minion, Dring.

Parlay can alter a living being’s cellular structure through physical contact. In the case of humans, he can revert their bodies to a previous state in their lives. He can use this ability to reverse damage or to even keep himself from being damaged in the first place.

One of his medallions has a life form known as vein: a pliable, gelatinous blob. He can force it to grow into different shapes in its “red” form; and solidify it into a magic-draining “blue” form.

His other medallions have plant life inside, including the “dream lily.” It unfolds from a seed and spreads over an area with scale-like leaves that overlap with each other. If the plant is damaged, it converts the atmosphere in the immediate vicinity to carbon dioxide.

There are other organisms that Parlay commands, and they all do equally amazing things—but that is a story for a different time. ;P

Oh, you know, just that episode of Sailor Moon where Sailor Jupiter ice skates with some Russian dude: 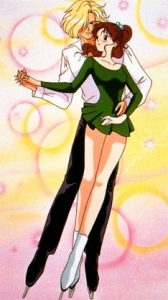 Well, he inspired the hair and slacks anyway. And possibly the flying skating rink at the end of the story.

I’ve mentioned that some of Mean’s design was inspired by Lina Inverse from The Slayers. And now that I think of it, some of Parlay was probably inspired by Rezzo, the Red Priest, yet another character from that show: 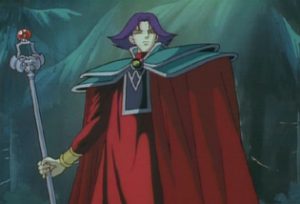 Rezzo is a blind user of healing magic. Yet, he could never find a magic strong enough to heal his own eyes. So he expanded his skills to the dark arts in his search for a cure. He isn’t exactly like Parlay; I was just intrigued by the idea of a ‘healer’ type becoming corrupted over time. Life will do that to some people.

But in order to truly flesh out Parlay I worked backward. I started with a climactic battle in the sky: Mean vs. a person. I knew I wanted an airborne fight since Mean could show off her gravity powers that way. That scene also inspired some of the limitations that magic has in my story; after all, if magic could be easily used on a person why wouldn’t Mean just make her foes float away? So I decided that magic wouldn’t work on living cells. With special exceptions, of course. Storytellers love breaking their own rules it seems. 😅

Q: How can he be a threat to characters that are learning magic?

A: Make him BETTER at magic.

Q: WHY would Parlay be better at magic?

A: Make him a survivor of the planet-wide catastrophe.

Q: Why would he survive, when no one else did?

A: Give him a forbidden power that ensured his safety. Have Parlay ‘break the rules.’

I suppose I could go on about Parlay, but I don’t want to get into spoiler territory for my friend Kim. Let’s just say he’ll need another entry on the bio at some point in the future. 😉

I know I’ve posted it before, but once again I present “Mithos” from Tales of Symphonia: