Everyone needs a friend to help them through the tough days. Let’s move on to Mean’s friend, Trisk.

She is six feet tall with long, black hair. Her fingers are slender and her face is round. She likes to wear a sweater with a mandala pattern on the front. The symbol represents a group of people who studied a forbidden magic that affects the body itself. She has some knowledge of martial arts, and she applies this knowledge in attempts to strengthen her skills with magic. Otherwise she is rather withdrawn and self-centered, believing the individual to be held higher than anything else.

She befriends Mean shortly after their arrival on the alien planet, yet this moment is not described in the story.

She learned magical arts from records found inside a tower that was abandoned by someone named Tenny. The first art is called “static” and it makes the user’s body impervious to any other physical or magical change.

The second art is called “tearing,” and it rends any material the user touches with specified points on their body.

These arts require a certain state of mind, however; two differing arts can not be activated simultaneously. Also, swapping between arts causes total exhaustion of stamina: forcing the user to soon lose consciousness.

And these descriptions of Tenny’s arts are probably better than anything I’ve put in the book yet. 😛

UPDATE: I put better descriptions in the book!

Trisk is the first character I came up with that is mostly based on a real person: my friend Kim. I bet you thought Trisk was just a generic “Asian warrior woman,” huh? Well the joke’s on you because Kim is not Asian, but one-eighth Cherokee! Ha!

I also use the character to explore my thoughts on individualism. Is being alone best for yourself? Can you be self-reliant and still accept help from friends? Is there a correlation between dependency and will? I’m not sure if I answer those questions, but they sure look nice on paper!

But why use her appearance as a base for the character? Well, I’ll let you in on the revelation: my other female protagonist, Mean, is really short! So not only are their personalities opposed but their HEIGHTS are as well! Yeah! I bet you’re glad you read this; it’s genius at work.

As I have not yet found an artist to portray Trisk, please accept this picture of my friend Kim: 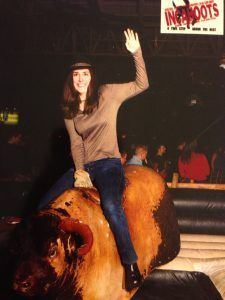 I had to beg for her permission for like fifteen minutes. I saved the cowboy hat for a different character, though.

EDIT: HOW COULD I FORGET THE MUSICAL INSPIRATION FOR THESE CHARACTERS!?

Here’s “Fatalize” from Tales of Symphonia. Turbulent and powerful, for those moments when Trisk’s kicking ass.