There’s always that ONE antagonist that has a past relationship with somebody on the “good guy” team. Let’s talk about Tyle Dhaston!

A tycoon’s son from the nation of Jesice. He is heir to the Dhaston family business: a technology company known for the development of multi-directional orbs that have replaced standard rubber tires on many vehicles. Tyle himself was used as a “tech demo” to showcase the orbs’ use on prosthetic legs. His right leg has been replaced by a mechanical stalk fitted with one of the orbs; his left leg rests on a pedal that protrudes from the stalk. His right arm is also completely artificial. That arm is covered with realistic-looking synthetic skin. There is a dimple on his chin, and his hair is styled in a pompadour.

Jesians have four hearts, and two of Tyle’s are weak. The limbs on the right side of his body were crippled as a result. Trisk was there for him in the past, but their relationship deteriorated after his limbs were replaced. This event caused both of them to question the importance of individuality in differing ways.

In the book Tyle joins forces with magic-using Parlay—yet Tyle despises magic, believing it will have a negative influence on Jesian culture. He aims to demonstrate to his people just how destructive this new power can be.

Wealthy, with ties to a powerful family. Although that doesn’t mean much when you’re stranded on an apocalyptic world. His cybernetic limbs give him superior mobility and strength. His mechanical arm is programmed to automatically protect his head from any incoming blows.

Spoilers for book one!!

[spoilers]He finds a large rifle called a Staccato, previously mounted on a helicopter. It has monstrous recoil as it fires a nearly-instantaneous blast of energy at the target. After his clash with Vornis, his body and original, organic limbs are restored by Parlay’s magic.[/spoiler]

When I worked at my father’s daycare, I knew what it was like to have a business-minded dad. I felt the expectations he, and everyone else, had for me. With such pressure to take up the family trade, what else could I do? I quit my job and used the experience to define one character in my book series of course!

Dhaston is one of the only characters that has first and last names that are frequently used. This is to reinforce his self-imposed celebrity status and sense of entitlement. His name also has silent and extraneous letters to symbolize his reliance on cybernetic limbs.

I also realized that there were many characters with names like “Dhaston” In other fictional works. I mean there’s Dyson from Terminator. He even worked on cybernetic arms, didn’t he? I even saw a “Dyson Ball” vacuum cleaner in a TV ad the other day! I didn’t mean to make Tyle a parody of vacuum cleaner salesmen, I swear.

His character IS based on the idea of an extremist businessman, however. The way I see it, a normal businessman is hoping to take advantage of an already-existing opportunity. But Tyle hasn’t learned how to do that yet. Instead, he attempts to create a situation which will influence the market. Or, rather, protect the market that he seeks to corner.

Here’s an extra bit of trivia: I ran into a problem when I was trying to describe his cybernetic arm. I mean, since it looks just like a real arm how should I refer to it? In the first draft I was just saying “his left arm” or “his right arm,” but that was dull. And he likes punching and choking people with it so I HAD to mention it. That’s when an idea struck: I made him extremely pale! And since he was working outside in the daylight when he’s first seen, his organic arm would get tanned, and his synthetic arm would stay the same shade of pasty white!

But until I can find an artist to portray this pasty, dimpled, character I’ll have to use a bizarre drawing of Franky from One Piece that “ijul” posted on Deviantart: 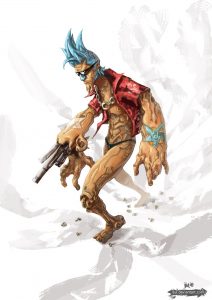 The picture looks nothing like Tyle—or Franky for that matter—but beggars can’t be choosers.

Here’s “Untold Despair,” from Tales of Symphonia: Dawn of the New World.

The synthetic harpsichord fits Tyle’s aristocratic manner quite well, I think. And the synthetic everything else fits the “cyborg” half of his character.