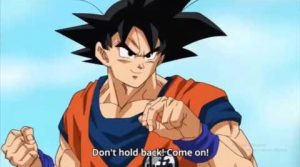 Now, Kimberly! Come at me with your FULL POWER!

Kim starts off with an easy catch, but First Book Brad let it slip by.

The subject of the writhing is in confusion here. I am not going to have it ‘dance’ though. The ballroom scene isn’t until book two.

Oh, like how you’re PLEADING for me to change every word in the entire book to ‘said?’ In some cases you are right, however. Mean really is just asking here.

But man, every time I use something other than ‘said’ you’ve got it crossed out!

In every draft of this story Darklord’s name is mentioned before this. The only reason I can think of is that since Mean rejected that name I’m also unwilling to mention it in the narrative. That might not be the correct thing to do. But annoying you might be worth it.

I discussed this part with Kim in person: She wondered why Dark would sit in the back if there was a passenger seat in the front of Mean’s car. I told her that Darklord doesn’t trust Mean yet. Kim then countered that Mean wouldn’t let a stranger ride behind her. But then I counter-countered that since Mean believes Darklord is Tecker, she WOULD let him do that since she’s obsessed with him.

Kim took the full force of my attack and was blasted into a mountain.

This is the first magical engine that’s encountered in the book. I don’t use the word dodecahedron, which is a solid figure having twelve faces. I didn’t want to come off as a smarty pants; after all, I only knew of that word from the book The Phantom Tollbooth. But with all the hexagons and pyramids showing up in these stories, I think a little clarity is justified.

Or how about a barbed fishhook insignia near the roof fluttered on banners?

In this scene Mackaba is using cameras to check on Kates’ house and the Peer Fuel station. Earlier he mentions that the cameras were mounted on buildings. I meant the buildings in the city but they would have to have jumbo telescopic lenses to see all the way down the road. I’ll just put the cameras on the various streetlights on the Nine-Mile Road instead.

Immediately after this Darklord gets worried. He can tell something isn’t right BECAUSE Mackaba isn’t making sense. If he had said something reasonable then they’d have no reason to be alarmed!

The police were only there to watch over the property and buildings in the city. Protecting the people was just a personal request from Lord Ley Tecker. I thought I explained it somewhere but maybe I could add a few more words here to clarify.

And ‘he said’ is crossed out here!? Kim, I thought you wanted me to use it more often! Sheesh, what will please you!? Dialog, alone, in quotations marks!? And don’t tell me ‘A person performed an action so that means they’re the one speaking next.’ Both Darklord and Mean are there so either one could have done it.

You sure you want to cross out that ‘up?’ You won’t get all confused and think it’s unfolding down, or sideways or something? 😉

Although you can only ‘hoist’ upward so I suppose that’s enough.

Well, Mackaba is not rational. I did have a talk with Kim about this, though. And maybe it would be better to have a different character show up first. If not Greasemonkey then maybe Parlay. I mean, he and Tyle use the Dhaston building across town. Shoot–it wouldn’t even have to be a real person; Hellzoo can make illusions and she loves making people feel guilty anyway. Something to consider.

Now for the car chase.

Yes! This orb vehicle has four seats! Also a trunk and a CD player! How am I supposed to tell you all this though without making it sound like a frickin’ car commercial!? If only I had a product endorsement deal going. Then I could have Mean’s father gift her a Volkswagon with a heartfelt request to explore the one road on the other world while making full use of the optional extras.

They are in a high-speed car chase with a modified fruit harvester! You want Mean to take her eyes off the road and hands off the steering levers to reach for the glove box? That would be dangerous!

What! You want Mean to GET OUT of the car while they’re being chased!? That’s even more reckless!

Wait. What am I saying? Of course it is! I can picture it: Her tiny figure caught in the headlights, standing defiant against the mad officer. Oh, how thrilling! Now you’re getting the hang of this, Kim.

I thought it was a direct hit, but maybe I made it sound like Mean was aiming for the spotlight instead. The table hitting the front of the harvester is just physics: a counter-force directly against it wasn’t enough to stop it. So Mean used the crane as a lever to pull the vehicle off its front wheels. I’ll give it some more work.

Also, an object that Mean affects continues to fly in that direction unless it runs out of power or she alters it again. Don’t worry, though! The master of exposition, Tome, is just one chapter away!

No. Dang it. It’s specifically the type of ‘well’ you utter after an exciting car chase and explosion of furniture.

Fine. She said. SHE SAID. Let it be known that Mean will stand there and say something with no tone or inflection of ANY KIND. 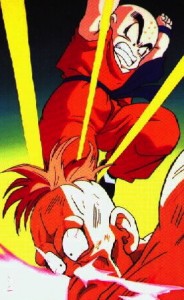