But for now, this chapter starts in Hardpan City, with the reader clueless about what Mean and Dark are going to do. I dirtied the place up a bit since it had been uninhabited for a month or so.

The mansion was built by natives of the planet. But the tourist Jesians didn’t know enough about magic to put that stuff into Hardpan City. They were going to rely on hard-working janitors, but alas, those hard-working souls all got sick and left.

Mean shows up, baits Mackaba out of the building, and the fight begins. Mackaba begins to create a giant bubble filled with odd water.

She could but she can fly anywhere she wants inside the water sphere anyway. She’s just slower in there. And she’s trying to distract Mackaba, so flying away completely isn’t something she wants to do.

Hm? Underwater scooter? I came up with this idea, Kim. It’s a device that can propel Mackaba around in the water. A quick internet search will prove it. 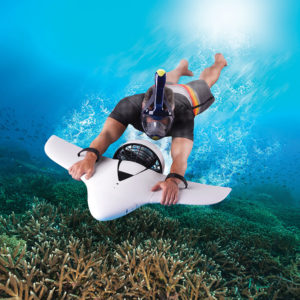 DANG IT! You mean this is a REAL accessory that underwater people use!? And it’s called a ‘scooter’ of all things!? Gotta be kidding me. Someone must have read the first draft of my book and invented them. And now it’s me that’s stuck using that silly word now. Honestly!

Next Mean uses her gravity powers on the jet pack, er, ‘underwater scooter’ to send Mackaba flying around.

Kim did suggest that I have Dark come outside and get mixed up in all this, so that could probably factor into it.

Mean is pulling Mackaba toward her. The drag from the water is too strong against his arms for him to unbuckle anything. I should probably just outright explain it in the chapter, huh?

Whoops, forgot to mention she’s behind him. HA,ha, I made it sound like she’s giving Mackaba a hug.

What? But I’m always writing in the narrative that it’s wavy and slicked back over his head. I must need to mention it more often! But the length is about nine or eight inches I guess? It’s only dangling here because it’s wet and out of place.

Mackaba is on the ground but he tries to shoot Mean with his harpoon gun. She tells him to stop.

I was trying to show that Mean barely grazed the gun in her attempt at kicking it. You don’t always get to choose what body part hits where in a life or death battle. Trust me. I play lots of video games. And all you have is your four years of taekwondo classes. Pf. 😉

And yes, Kim also pointed out that I missed a ‘with’ before ‘the toe of her shoe.’

Oh my goodness golly it’s SYMBOLISM for the impotence of justice on this lawless world, Kim! Or, uh, yes, I could just move that line somewhere else since it doesn’t have anything to do with Dark.

OR DOES IT? Hm? Hmm? Maybe you should get going on that next chapter, Kim! I’m finally caught up! Although I must admit, this one will take me quite some time to fix.