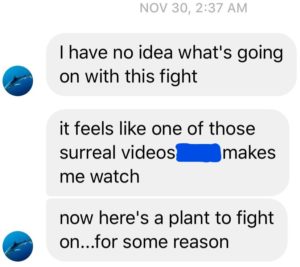 First we start off in a flashback at Trisk’s childhood house. Tyle is there too, and he still has all his arms and legs.

Trisk’s bed. People love sitting on beds. You don’t go into a bedroom to sit on a chair. That’s what every other room in a house is for.

Ah, I see. You just want me to put an explicit sex scene in the book. Nice try, Kim!

What I MEANT to say was “a punching bag hung next to her clothes, affixed properly to a sturdy ceiling support with the appropriate anchors, swivels, and springs.”

It’s also a spacious walk in closet because of COURSE you need a few feet to account for the sway of the bag. I must have erased all that on accident before I sent you the chapter, Kim. 😉

Oops, I forgot say how old they were. They’re teenagers here. This scene opens with the location as ‘Trisk’s childhood home’ so I can see why you might be confused. They are NOT children, and are of legal hand-caressing age.

Kim, the chapter where Kim and Tyle meet again is called “Reunion of Lovers.” Who did you think I was referring to with that title? Parlay? The flying snails!? Seat cushions?

Now we’re back in present day.

Yes. Should I outright spell it out in the narrative? I guess I could mention that it’s the ‘Hardpan’ Dhaston building so you don’t think it’s a Dhaston building over on Jesice. They have a few.

Kim! Stop her! She’s trying to escape the book!

The story isn’t that bad, Trisk. I’ll try to give you a motive to run to the hex door, I promise. Just don’t leave!

Ha,ha. I was thinking Trisk was going to warn the people on Jesice, but what good would it do now?

Yeah. As you recall, she took her sweater off before her first fight at Stone Rory. But she accidentally left it on THIS time as a subtle clue to the reader that she isn’t fighting with a clear head.

Or maybe I just forgot to write ‘she removed her sweater,’ and Tyle took advantage of my mistake. These fictional characters sure are crafty.

Oh, right, like in Dragon Ball Z: The two characters will clash, the first hit will be blocked, and the combatants will be locked in place for a few seconds. THEN comes the ‘Dah-dah-dah-dah-POW!’ of the super-speed fighting.

Now we’re back in the tunnel where Mean and Dark are trapped.

You’re right! I didn’t mention the lens before! PLOT TWIST!

I’ll just go back and put it in the original description. And… done.

Mean is about to use Dark and his armor as an object to throw down the tunnel so that the hex door’s battery wears down.

Yeah she’s backing up so Dark doesn’t hit her. What? You got it. I see no need to clarify further.

Although if Mean WAS standing in the hex door destination area, the hex door at the end of the tunnel wouldn’t activate. Hex doors have safeguards against telefrags, as the the term is known in the game Doom. So Dark would be able to escape. That would leave Mean trapped in there, though. 🙁

Now we’re back on Jesice, where Tecker is running around after hearing about Error.

Yeah, Hatchel was jogging with Tecker in chapter nine. You JUST critiqued that part six months ago, Kim! C’mon!

Yes, the letter J is her name. Should I spell it differently? Jey? Jae? J’hyaegh?

Kim’s note here is pointing at ‘Also, that you’.

You’re still reading these lines out loud? This work is meant to be experienced in the mind! The bun is in your mind!

However, you seem to be right this time. How’s this?

“Vail just told me that you’re an alien. And that you can somehow stop the machine. And that Brad Smith is the greatest, most handsome writer in the entire universe. Anything else you want to add?”

Read that out loud a few times, Kim. See how it plays.

Hatchel MUST convince Tecker that he can stop Error. That’s why he needs to tell him that he’s an alien that understands the magical technology. I don’t say it here, but his daughter is Mean. And since she’s off-world now he can finally reveal the family secret without fear of her being chased by alien hunters.

Now we’re back at Trisk and Tyle’s fight.

I went to Kim’s house shortly after she critiqued this chapter. I told her: let’s act this scene out. I’ll be Tyle, and use this ottoman as the Dhaston orb under my leg. You be Trisk, since the character is based on you. Then, I’ll choke you and you try to kick me.

That’s a really good idea, right? And guess what? Kim was able to reach my torso with her kicks! And even my face! Turns out that legs ARE longer than arms.

When I regained consciousness, Kim had some ideas about how to make this scene more believable. She said “Have Tyle’s synthetic arm stretch out like Inspector Gadget. Then Trisk can’t reach him and she’d HAVE to destroy it.”

But how? Any ideas, guys? Could he use his entire body to pin her against the pillar? Maybe grab her from behind in a submissive hold?

But the scene needs to end with Trisk SHREDDING Tyle’s mechanical arm and leg.

In case you haven’t noticed, Kim uses the ‘sandwich’ method of criticizing. She graced me with a single compliment in chapter one to soften the blow of the next 4,390 complaints.

It’s because I was really vague about it!

But it would be awkward to have Trisk explain it as she’s getting choked. So I’ll have MEAN explain it as her bracelet is flashing in the tunnel. She’ll be like, “Oh no! Trisk is using up her magic! That must mean she’s switching out of her static art and into tear mode! That will destroy any inorganic limbs that are choking, grabbing, or pummeling her, but she will faint afterwards from the shock of losing her magic!”

See you next time in chapter twenty! Six more to go! 😉