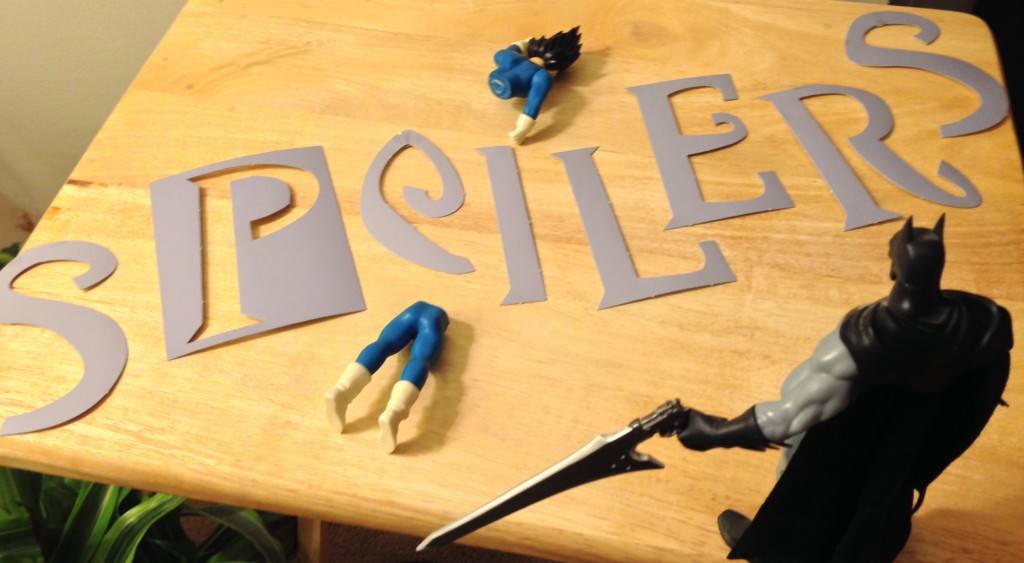 That’s right; there’s no chapter this time! It’s all review and discussion for the latest Star Trek film! And that would be Star Trek Beyond: the third installment with the rebooted crew of the NCC-1701 Enterprise. Zounds, what a glorious future of storytelling we have in front of us. I can’t wait for reboots of Picard’s crew, Janeway’s crew, and Sisko’s interstellar baseball team.

As I told my friends, the film feels like a pretty good episode of the show. The musical score was nice, with the contemporary music being the exception. Horrifying stuff. But more on that later; for now I want to discuss a storytelling device that this movie uses. Constantly. The “Chekhov’s gun.”

As tvtropes will tell you, a “Chekhov’s gun” is an object or idea that is brought to the viewer’s attention. At the time it will be played off as unimportant. But this object will be used at a later time to progress the story. I think it’s a fun storytelling device, and often a wise one to use. But can it be too much of a good thing?

Maybe. If you’ve seen the film you probably noticed “Chekhov’s guns” all over the place. I’ll go through the ones I remember:

The trinket that Kirk offered to the tiny, angry, aliens:

This type of Chekhov’s gun is mentioned almost immediately on that page I linked: an artifact that powers a doomsday device. In the film, this is the object that the villain Krall wants. I happen to think this type of “artifact hunt” is a bit dull. I’m not even sure the villain really needed it. I mean, he HAD a swarm of invincible needle ships from the start. I get that he wanted the doomsday virus to leave the starbase intact but c’mon man.

If a character gets sick, you can bet there’s a reason. Scotty’s little buddy is back, and this time he has a cold! I thought this was funny, though: he sneezes on a lock and his corrosive snot melts through the cell door holding the crew. Wasn’t expecting that.

One of the best ways to draw attention away from the true purpose of a Chekhov’s gun is to trick the audience into believing that it’s ALREADY served its purpose. Early on, Uhura tries to give her necklace back to Spock. I was fooled, here; I just figured that it was an excuse to show us that their totally smokin’ relationship had taken a platonic turn. Spock refuses, telling her to keep the rock. I thought that was the last of it. But later, when the crew gets separated on a mysterious planet, Spock realizes that they can scan for the rare Vulcan metal in the necklace to find Uhura. Very nice!

The traps that the alien uses:

Shoot. What was her name? The lady with the white and black markings on her face? Jaylah! Thank you, IMDb. Anyway, this alien rescues Scotty after the Enterprise crashes. Several people jump him, but Jaylah drives them away with the help of holographic doppelgangers. She also has access to a quick-drying foam that traps Kirk on a separate occasion. Both of these tricks are used later to deceive Krall and his men during the rescue: Kirk cruises through the base on an antique motorcycle, sending out copies of himself on the bike.

He is also spreading that foam from the bike’s exhaust pipe, blocking gunfire and making barriers for his people to hide behind. This also reveals his location to anyone that bothered to notice, but oh well.

This is more of an in-joke but I thought I’d mention it. I can’t remember who says it, but “a giant green hand” is thrown out as a theory as to why ships are vanishing in the nebula. I recalled that in the original series, one of the episodes featured such a hand–it appeared out of nowhere and snatched the Enterprise.

I thought that would be the end of the reference, but to my astonishment the green hand swishes through the end credits after the movie! Zounds!

The radio and the terrible songs:

I wasn’t able to guess this until right before it happened. While looking over the downed Federation vessel, Scotty triggers a radio. It plays some bizarre non-video game music. “Fight the Power” or some such. I assumed it was just so the producer could sneak in some of his favorite jams, right? But these “classical” songs are actually used during the final scene! It’s how they DEFEAT the swarm of invincible death ships!

I was going to complain about this, but I think I’m just a little bit jealous! Why can’t I force readers to listen to my favorite songs while they read my stories!? I mean, I’d need readers in the first place but still! Imagine it! An entire book in digital form with specific songs set to play along with pages of my choosing! And it would be something way better than “Sabotage!” Oh yes! Like this, for example:

Mmm, yes. I do believe Private Piddler’s theme should play for one third of book four. What’s that? You already stopped listening? You didn’t even click on it? Well too bad! My future of “digital books with a forced soundtrack that you can’t turn off” is coming! The songs will be integral to the plot so you’ll have no excuse! All the characters will bounce their heads to the beat and snap their fingers so you’ll feel guilty about hating it too! Ha ha! HA HA HA HA HA!

In conclusion this film has many fine examples of Chekhov’s guns: ranging from subtle to LISTEN ALL Y’ALL IT’S SABOTAGE! Learn from it. Thank you and good night.