First we have Captain Ecks arrive at the pyramid via helicopter where he meets up with a mysterious stranger on the roof.

I was going to argue that scanning is different from spying, but omitting one word does make the sentence more concise. And I love concise. Off to a great start!

You think that’s weird but saying ‘From your name tag I can plainly see’ is normal. You goof. And Ecks wasn’t expected to be there so Tyle wouldn’t be welcoming him.

I do like your ‘eyes flicking to the nametag’ line though. I’ll put that in there.

Um, ya got me there! How about “The man in the overcoat put a hand on his chin: smooth, save for a dimple stuck square in the middle.”

Yeah, that works! And I get to put another colon in! Yes!

Sheesh Kim I thought you read through the book once. Did you miss the chapter where Tyle rolls around on his wheel firing a rifle all over the place?

And if you didn’t then you’re supposed to wonder about the noise. It’s a mystery, like the mystery books you yourself write!

Because he’s Tyle friggin’ Dhaston, heir to the Dhaston company. He’s arrogant, and he just expects everyone from Jesice to know who he is. And I think I’ll push his name reveal back even further just to annoy you!

Then again I’d rather not wait ten months for your next review so I think I’ll consider your wise advice.

Next they enter the hex door that leads to the pyramid’s interior. Parlay and Dring are waiting for them there.

Yes. Fine. You’ve convinced me! I’ll have Tyle do his whole “I’m Tyle Dhaston!” shtick up on the roof instead of waiting ’till chapter seven. There will be no sense of mystery or suspense, just endless introductions!

Because Parlay is his boss and he doesn’t want to speak before he does. Because his lisp keeps him from saying his own name correctly and he’s shy. Because I think you can wait ONE PAGE before someone tells you what their name is!

Hm, I can’t find any other time he growled. Maybe he just needs a snickers.

This is something Kim already taught me, but I’ll put it here as an example of what not to do. These actions aren’t related to each other so there’s no reason for them to be in the same sentence.

Oops, I didn’t even think about that. Why did you cross out his nodding though? That’s what police do right? They nod like “yeah you’re busted now.”

Your suggestions about what to omit here are good, but yes you fire guns with two hands.

I probably need to add more details here now that I think of it. Like the shell being ejected so you know it was a real bullet.

Yeah it’s the reveal that Parlay wasn’t hurt from the bullet. Do I need to go all “anime” with this? Have Ecks shout “You’re not hurt! But how!? That bullet should have pierced your skin!” Then Parlay dramatically steps out from a cloud of smoke: 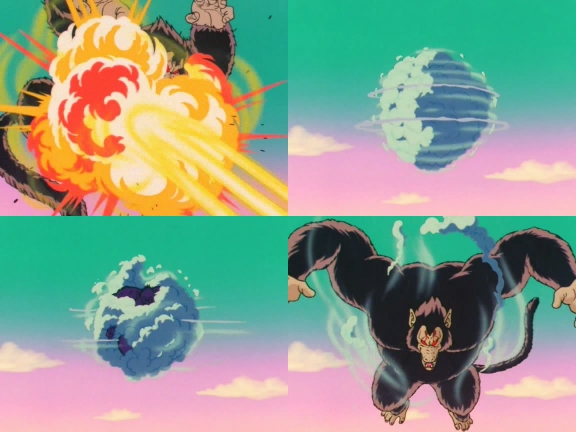 I wrote that Ecks stomped forward two paragraphs ago so of course he can back up again! But yeah maybe I can have him do something else to indicate panic.

Because there’s a corner there? Maybe it’s a metaphor and Parlay’s imposing presence has ‘cornered’ him. Or it could be a zen riddle. “How can one person corner another?” My book is so deep.

And now that Ecks has realized that his pistol is useless against Parlay, he calls for the helicopter remotely to fire upon the room that they’re in.

He should also be mildly fascinated since he uses it later while rolling around on his ball.

It’s like One Piece, Kim. First we get a silhouette. Then maybe a few chapters of being called “that strong guy.” Then a month later we get a full page that features the character in detail with their full name and title.

But I already promised to change all that so it doesn’t really MATTER NOW DOES IT.

And if you press your lips together your chin will wrinkle. I’ll go back and describe it happening in such glorious detail that you will stare at your monitor with eyes open and chin wrinkling.

Huh? The rug is sitting on top of a hard floor and Ecks is wearing armor. Even my little Shih Tzu Samson could make a rug slip if he was moving fast enough.

For the love of–what am I supposed to do then, Kim? Have Parlay listen to him whimper and THEN watch him claw at his chest? Do you really think that the reader is going to stop here and think “Wow! Parlay can see sound waves!”

I also saw your note to get rid of the colon. I think it fits though.

Kim wants to change “rocked” to “flung” and put “slowed THEN ceased” instead of “and.” I’ll let you finish with a win this time, Kim.