So come inside as Kim aims to correct my delinquent writing behavior. I welcome it, but what have I done to incur her wrath this time?

So this is your new thing. Now present tense words in past tense sentences are “wrong” somehow.

Nonsense! Tenses were my greatest thing I have done!

This is the next sentence on the page. Hm. You could be correct Kim, in that I’m overusing it. And as I take a quick peek down the margin of Kim’s notes I see that she has written “Another —-ing word” over and over. Are you sure you’re not just bleeping out swears?

Wow you remembered that Mean has a device under her shirt. I’ve been writing book four where it’s LONG gone. Thanks for the reminder. It’s a gravity pommel right? I think that’s it.

Ha,ha. That’s right Trisk doesn’t get the power to slap people with her smiles until book three.

What? No she didn’t. She groaned out that entire sentence. Trust me, I know what it’s like to get nagged at by a woman.

Now this is what I wanted Kim here for: She loves nautical-themed stuff. Her house is filled with it. If anyone knows how to spruce up Hilo Water Plaza it’s her. She also pointed out the two ‘alsos’ in a separate note.

I’ll just have Darrow twist a spigot and say “There is no amount of liquid contained anywhere in it!”

At this point “odd water” begins to pour out around the room, and I’m calling it ‘liquid’ to heighten suspense. But yes, it is just normal water that you can breathe in while submerged; there is little visual difference.

I suppose I’ll do as you say and call it water. Let this fascinating mystery speak for itself.

::Groans for an entire paragraph:: Kim, I’m trying to understand. When I typed ‘it’s a well’ earlier you told me to describe every little detail about it so that I don’t send the world tumbling a state of confusion. Yet when I take the time to describe something you demand that I only call it by its name!?

Or are you–gasp–suggesting that I name something and ALSO describe it!?

Odd water does not distort sound as much as real water does. I’ll just add that to the paragraph below, where Mean reads the sign that explains everything.

Well they can’t change into their swimsuits in front of Darrow!

But where are their swimsuits? Did they pack them before they left Jesice? Did they loot them somewhere? Are they going to their respective homes to change? I guess I could write something to fulfill your curiosity.

Mean is explaining the Lord Ley system that the nation of Jesice uses. Since she’s obsessed with Lord Ley Tecker, I was trying to suggest that Mean has memorized official statements and laws.

I guess I can get rid of that ‘bright eyes’ part and have her pose in a stately manner as she reads from an imaginary legal parchment. 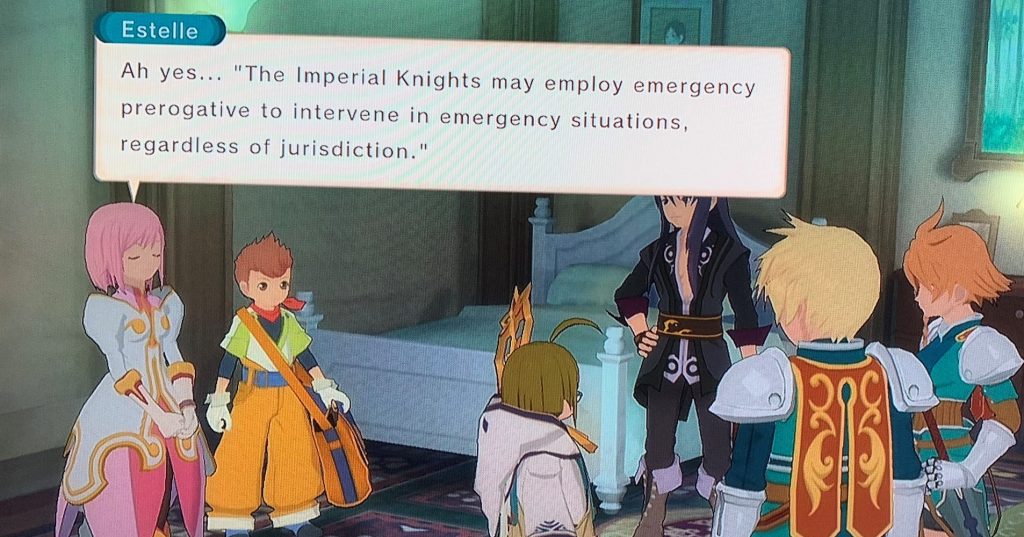 I do love it when the games I play provide such convenient examples!

What’s wrong with spelling out the stammer? Haven’t you read Watchmen? If the living legend Alan Moore can make characters phonetically stutter, so can I!

My mistake. Yes, readjusting–that’s what she’s doing. I made sure to research swimsuits extensively so that I’d get them right. During my totally not creepy ‘pool studies’ I noticed that women were always tugging on their bikini straps. I thought I’d add that realism here for the sake of the reader. Always good to have your female insight, Kim.

The sun set in Hilo Water Plaza but now we’re in Stone Rory Refuge. These places are on different sides of the continent so the sun is setting later here. Since the hex doors offer instant transport the distance between places can be deceiving.

Should I point that out here? Is it really THAT confusing?

The last part of the chapter has Mackaba strutting around, talking to himself and barking orders at computers. Kim has a few criticisms here, but I think I’ll skip them. I mean, she has me as a good friend so she doesn’t understand how arrogant males act.

No, it isn’t supposed to be flooded; It’s just a malfunction. And the clothes and hat belong to the real Hilo that ran the park. I thought I gave you enough clues from the mannequin earlier but I guess it wasn’t enough. I’ll put in another monotone robot voice that says “HI I’M HILO WELCOME TO MY PARK!”

Now excuse me while I make every object announce what it is and put monitors on every hex door that display its global position and time zone so ONE ONE GETS CONFUSED when the sun goes down twice in one page.

Ha,ha, I’m just joking around, Kim. Please don’t take five months to do the next chapter. ♥